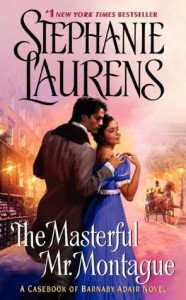 Well, huh. I don't think it's ever taken me this long to finish an SL title before.
From the day it came out til today, that's what, like 3 and a half months? Yeesh!

Before I go any further, I should mention you probably wanna read the first Barnaby Adair book, as the non mystery bits is a sorta continuation from there. And my  review bitching assumes you already know who the players are.

So what annoyed me...well honestly, it's that despite this being about 'the Masterful Mr Montague', there's was too much that wasn't about him and his heroine, Violet. As the "Casebook of Barnaby Adair", I knew we'd get some of Barnaby's perspective, and I figured we'd get quite a bit of Stokes, which would've been fine, I figured they'd be around to help solve the case.... but so so so much of the story is from their wives, Penelope and Griselda...who've already had their story, darn it!

The entire first half of this book, IMO spent too much time on them ( P&G) and their desire to find a balance between being mamas and their "work", (Penelope's a translator and gives lectures, Griselda, a shop keeper, and they both help out with cases)

There just wasn't nearly enough of Montague's heroine. She sorta gets the shaft so that P and G could figure themselves out, which wasn't something I was expecting, or even interested in reading considering it wasn't supposed to be their book!

And to be blunt, IMO we also didn't need the sex scenes ( and there were so many!) with Barnaby and Penelope or stokes and Griselda. Like I said, they've had their story, this one should've focused on who should've been its main characters, Montague ( his names in the title, dammit!) and Violet.

On a positive note, I did like that both MC's were older. It's been a while, and I have no interest in going back so I don't remember their exact ages, (or if we even got them), but they're not super young...and the older I get the more I appreciate stories about people who are 'past the first blush of youth'.

So yeah, 2 stars. At least if I decide to read the next one, I'll know what to expect!