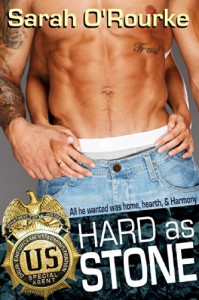 So Hard as Stone...I'm gonna say a solid 3 stars for this one ( I seem to be plagued by these lately!) ....I actually liked the first half better than the second, I liked how things were set up, how characters were intro'd, and that we seemed to be more in the Hero's head, more than the heroines.

Then the second half happens...everything after the heroine finds out what the hero was hiding, from that point on, it just didn't seem to work for me, and it felt like I had to push myself to keep going,

The H lies to her and the heroine forgives him within a day. Now this is a loooong book, so when I was reading it, It actually felt like it took forever for her to give him a chance to explain things,( iirc, it may have taken a quarter of the book, for them to actually get to the point where they talk things out, but really, everything for the most part is resolved within 24 hours ) so while it felt slow reading it, IMO still happened too fast.

The sex scenes...seriously, they were fucking long :p Maybe I just wasn't In the right frame of mind to enjoy them, but they seemed to take up a good chunk of the story, and, iirc, there weren't all that many of them! To be honest, I got bored, and I skimmed most of them.

Two secondary characters: the spritely aunt, who make sure everyone knows she's "old not dead," irritated me, I just think I've seen this type of character too often, so it was hard not to be annoyed by her, and then there's the assistant to the next book's hero, she name dropped quite a few designer labels within a very small amount of space.. D&G, manolos, prada, etc...I just wanted to tell her to get over herself. I think this chicks the heroine to first 'Estate' series title ( also by Sarah O'Rourke) which means I'll be staying clear of that book. Seriously, I sorta wanted to smack her.

Also, there's a gang rape survivor in this book ( there's, iirc, only vague descriptions for said rape in this book, but if it's an issue for you, you might wanna skip this one) who seemed to be way too accepting of the hero, way too early on, it just didn't mesh in my head...shouldn't she have been the most wary?

And like I said before, this is a looong book, and while I am usually of fan of lengthy stories, this one actually felt long....it just seemed to drag, the closer I got to the end.

Anyway, it wasn't a bad book, just not my bag me thinks.

On a side note, I'm Sorta peeved about the next book, Abel and Patience's, we got a preview of it, at the end of this one, and it doesn't sound half as interesting as I'd hoped :( can you say boo-urns?