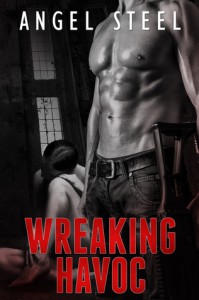 there's no cohesion to this story...it felt like the author didn't have a plan when she set out to write it, or maybe she only had a general one...but too many things seem like they just got thrown in...and there doesn't seem to be any consequences for anything ( or at least none that make sense) ....and so many times a character would decide something and I'd be left scratching my head, and wondering what the hell just happened?! and quite a few times it felt like stuff just got swept under the rug....

Oh and the hero's an asshole...in the beginning he was alright, and I liked him...and then things just went downhill and never recovered.

There were a few more issuesly it was just stuff that didn't make sense....more what the fuckery than anything else...

Having said all that the bare bones of wreaking havoc  are decent...and ms steel isn't a bad  writer...she just, IMO  desperately needs someone to help her get  rid of all the unnecessary, crappy, out of nowhere stuff her book is littered with.